Elisha honoured in his hometown 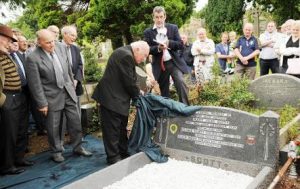 Former Liverpool goalkeeper Elisha Scott was honoured in his homeland of Northern Ireland in a special service on Saturday. The legendary custodian made 468 appearances between the sticks for the Reds in an Anfield career that spanned 22 years from 1912 until 1934.

After the Belfast Celtic Society tracked down his burial place and renovated the family headstone, marking the plot with the crests of both clubs, fans of the two teams gathered for an unveiling ceremony at Belfast’s City Cemetery on Saturday – half a century after Scott’s passing.

The date was particularly poignant as it marked 60 years since Belfast Celtic left the Irish footballing stage.

A red and white wreath of flowers, donated by the West Belfast Liverpool Supporters Club, were laid at the grave by Scott’s great grandchildren, while the Kop legend’s son, Billy, celebrated his 90th birthday by revealing the refurbished gravestone.

Malcolm Brodie, Scott’s friend and former junior reporter, gave a moving oration to bring the service to a close.