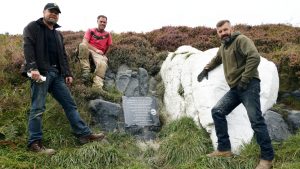 The White Stone on Cave Hill which once guided Second World War aircraft home to Belfast has won formal recognition with the installation of a plaque.

The commemorative plaque was recently unveiled at Belfast Castle and has now been installed beside the rock.

Postman William Adair Caulfield, who lived in Cave Hill Cottage on the Upper Cavehill Road, first painted the stone bright white in 1941 for a fee of £5 from the War Department.

“Cave Hill has been involved in many periods of Belfast history, from the Stone Age, the early Christian period and the upheavals of the 18th and 19th centuries; the story of the stone brings that involvement right up to the 20th century.”

Thanks to the work of the campaign, the stone has now been designated a ‘recorded historical landmark’ by the historic monuments division of the Department for Communities, and has been added to the Defence Heritage database.

Unfortunately, vandals daubed the stone with graffiti as recently as a few weeks ago.

Mr Hamill said: “Over the years, the memory of why the stone was painted had begun to fade but interestingly, a vestige of the tradition remained and many people painted it.

“It has been, in turn, orange, white, green, red, blue and even a vibrant pink in 2014 to celebrate the start of the Giro d’Italia in Belfast.

“The true history of the stone came to light as a result of an overheard conversation. Two of us were discussing how little we knew about the stone on one of our public walks when a lady heard us and introduced herself as the granddaughter of William Adair Caulfield and she was able to tell us the background.”