Impressive and stark feature on the coast at Whiteabbey 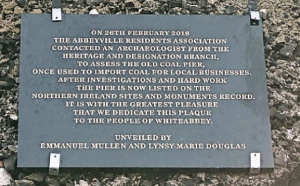 Campaigners are celebrating the inclusion of the former coal pier at Whiteabbey on the Northern Ireland Sites and Monuments Record.

The group’s chair Emmanuel Mullen and vice-chair Lynsy-Marie Douglas explained the ceremony took place almost a year on from when they invited archaeologists from the Heritage Records and Designation branch of the Department for Communities (DfC) to the village.

They added: “On our shores is the remains of the old coal pier where Kelly’s coal boats would come into Whiteabbey to off load coal onto the pier, which was then taken to Archie McFall’s coalyard in the village.

“The pier dates to the late 20s, early 30s and stands as a local landmark today. So we now have it listed on the Northern Ireland Sites and Monuments Record.

“It was with the greatest pleasure that we dedicated the plaque to the people of Whiteabbey.”

DfC confirmed that following a request by the Abbeyville Residents Association, the site was inspected by archaeologists (including a marine archaeologist) from HED in early 2018.

A department spokesperson said: “The surviving remains of this coal pier probably dates to the 1930s and it is an impressive and stark feature on the coast at Whiteabbey. It is an element of Belfast Lough’s maritime Industrial Heritage.”

The department added it is not considering the structure for listing or scheduling but it is recorded on the Northern Ireland Sites and Monuments Record (ref. ANT 057:500).

Expressing appreciation for the support of volunteers with the various projects, Mr Mullan added: “We want to thank McAdams Memorials for working along side us and producing a fantastic high quality plaque, excellent service and friendly communication.”

Abbeyville Residents Association recently mounted a plaque on the remaining structure at the shore where coal boats would once have tied up.